Model Parliament When You’re not in Poli Sci

I hope you are settled into your classes and keeping warm in this cold spell! I’ve been working hard on catching up on some homework that I didn’t get a head start on two weekends ago because I spent 4 beautiful days in our nation’s capital participating in one of Laurentian’s most-anticipated events – Model Parliament!

“Why did you go to MP, Amanda?” you might ask, “You were an English and French major!” Let me tell you, dear folks, first: read a blog I recently posted “An Open Letter to People who Disagree with Other People’s Majors”, and secondly, Model Parliament is an event so much bigger than the realm of political science.

I spoke with some students who attended Model Parliament this year to get their impressions on how the event is for us non-poli sci students. I spoke with Laura Robinson, in her 6th year at Laurentian and her 6th Model Parliament!!! Laura was in the Concurrent Education program and she majored in History in her undergrad, she is now working on her Masters of History and was just as excited to attend MP this year as she was in first year. It is an event, she says, that talks about “issues that everyone can relate to, like the environment.” All throughout the session in the House of Commons, our President Dominic Giroux, our Chancellor Steve Paikin and our Chief of Staff Alex Freedman were all seen live-tweeting and enjoying the speeches just as much as we were. Laura commented that the involvement from admin shows that they take it seriously too! Check out the Storify from the weekend that highlights some of their best comments!

Valérie Caza, a fourth year Orthophonie student in her 2nd year at Model Parliament told me that having students from all different disciplines is what makes Model Parliament unique! “It allows everyone to learn more about how parliament works and experience it first-hand, which is definitely not something that I personally learn in my field of study. It also sends the message that what happens in parliament and politics are not only important for those that are in that field, but everybody.” You said it, Val!

A 4th year études françaises student, Sarah Lalonde was taken by surprise in her first year that everyone is very embracing “especially if you’re nervous.” After registration, the attendees are divided into political parties who end up having your back “no matter what! You quickly become a team and each person, political science students and non-political science students help and support one another. Everyone is included in the process, no matter your knowledge on Parliament.” I can attest to this too, as I have very limited knowledge about politics and felt comfortable and prepared speaking in the House!

Kayla Perry (one of my roommates for the weekend actually!), our 4th year Communications blogger, also commented on how welcoming the environment of Model Parliament is. It allows you to meet people from outside your program and connect with upper year students “who have advice about school and life in general!” My roommates and I in front of the light show on Parliament Hill!

Daniel Melchior (my other roommate) a fourth year History and Italian student who attended MP for the first time this year thought it “makes your university experience better.” Being in Ottawa, sitting in the House lets you be a part of out-of-classroom learning and by participating in a democratic institution so we understand it better. Prime Minister Costello rapping his rebuttal to the opposition…

To close, I want to talk about the real superstar of the weekend, Honorary Prime Minister Anthony Costello. I am lucky to have all my classes with Anthony this semester and there is not a day that goes by where he does not make me laugh to the point of tears. Anthony smashed his speeches all day, some of which included raps and all of them his sense of humor. He studied History and English (not political science) and listening to him speaking in the House was by far my favourite part of the session! Kudos to you, my friend! 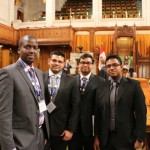 Top 10 Reasons You should attend Model Parliament Next...
Next Story » 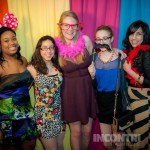 Like
Travel⛵✈️, Uncategorized Model Parliament When You’re not in Poli Sci

About the Author / Amanda