When Francisca Maepa found out she could pursue her Master’s of Science in geology at Laurentian University it was an opportunity she had to take.

“Laurentian University has a lot of excellent professors who are really experts in their fields,” said the South African student. Francisca Maepa has made the most of her time in Sudbury and has gone on several hiking trips with her friends, including a visit to Manitoulin Island’s famous Cup and Saucer trail.

Thanks to a unique partnership between the Goodman School of Mines at Laurentian and South Africa’s University of Limpopo, and some financial support from Ivanplats Ltd. and the Queen Elizabeth II Diamond Jubilee Scholarship, Maepa was able to travel abroad for the first time to continue her education.

She arrived in Sudbury on Sept. 10, 2016, and has taken every opportunity to make the most of her stay.

In her free time she has gone for hikes in Killarney Provincial Park and on Manitoulin Island with her new friends, and has taken in the unique winter experiences (including yurt camping in Windy Lake Provincial Park) not possible in her home country. Francisca Maepa is analyzing core samples for her master’s research.

Her master’s research focuses on mineral prospectivity mapping of Northern Ontario’s Swayze greenstone belt.
By analyzing data sets, the goal is to discover regions that could host gold deposits just waiting to be discovered.
Over a five-year period 35 University of Limpopo students and junior faculty are expected to come to Laurentian to advance their education.

Michael Langa, also a Master’s of Science in geology student, was one of the first to make the trip.
Langa arrived in Sudbury in September 2015. He said his experience at Laurentian has expanded his horizons.
“When you’re back in South Africa your field of view is limited to your vicinity,” Langa said. “You don’t know anything else other than your immediate environment.” Michael Langa says his exchange to Laurentian has broadened his horizons.

Langa expects to complete his Maste’rs later this year, and is considering a PhD as his next move.

While the Goodman School of Mines’ partnership with the University of Limpopo has expanded opportunities for South African students, the collaboration has also benefited Laurentian University students.

Master’s of Science, geology student Cedric Mayer was in South Africa for six months in 2016, where he had the chance to teach a first-year geochemistry class at the University of Limpopo. Cedric Mayer made the most of his time in South Africa, and even got to walk alongside a lion while visiting a nature reserve.

Mayer said the experience helped boost his confidence and improved his public speaking skills.
While in South Africa he also completed some field work in the Bushveld Igneous Complex — the world’s largest platinum-palladium deposit at Ivanplats mine.

As with his South African counterparts, Mayer also used the opportunity to travel and take in the local culture.
His more adventurous moments included taking a lion for a walk in a nature reserve, and entering a shark cage near Cape Town, where he came face-to-face with three massive great white sharks. 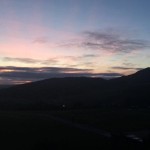